Beauty of match play on display at Gil Hanse’s Ohoopee 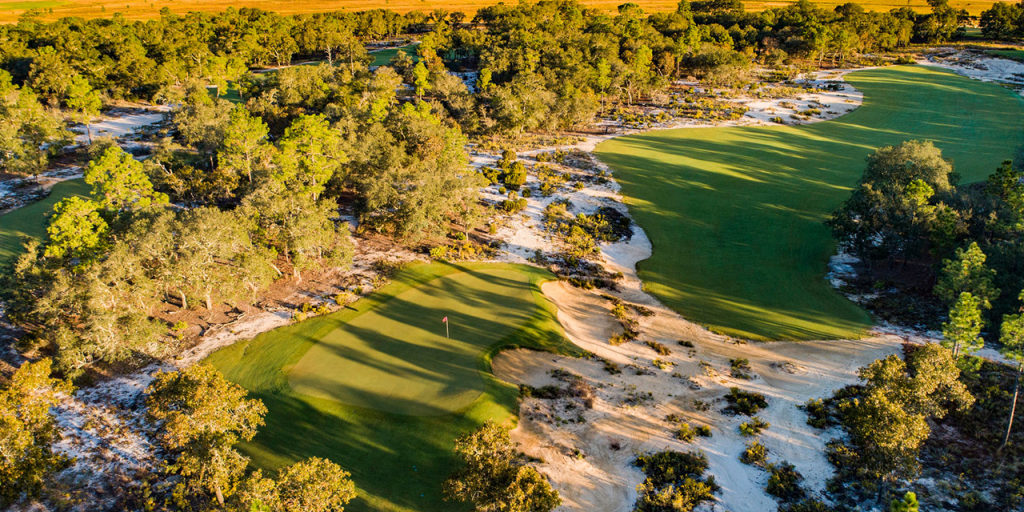 COBBTOWN, Ga. – In December the Presidents Cup was played at Royal Melbourne in Australia, giving golf fans a chance to see the game’s best compete on one of the game’s great courses. It also was a chance to experience the beauty of match play.

“Match play is a completely different game. The focus shifts from beating the course to beating your opponent. Different dynamic,” Conrad Ray, Stanford’s director of men’s golf, told me recently.

Changing that dynamic makes the golf more personal. Match play adds layers of strategy and psychology to a round, and it brings out a wider range of emotions. All of it equals a heightened experience for players and fans alike.

Match play can yield thrilling and compelling golf on almost any stage (i.e. Hazeltine and Medinah), but the opportunity for excitement, creative shotmaking, risk-taking and disaster is far more likely at architectural masterpieces such as Royal Melbourne.

So what makes a great match play hole or course?

While that could be debated forever, the answer that seems to be consistent from players, caddies, designers and fans is options.

Giving players options requires them to think and execute. When you add in the head-to-head element of match play, the thinking becomes more complex. Providing options also leads to more aggressive play. Knowing that making an 8 only costs you one hole shifts the risk vs. reward calculation for players.

Firm and fast conditions add to the intrigue. Giving players the choice to use the ground contours requires much greater thought as different clubs, trajectories and spins are factored in. Courses that are wider, play firm and fast, and feature strategic hazards offer the best match play venues.

Former Aussie tour player and course designer Michael Clayton believes the 10th hole at Royal Melbourne West (No. 6 for the Presidents Cup) is a prime example. Players can lay up in the wide fairway or try to drive the green by carrying a deep bunker. High risk and high reward.

Royal Melbourne proved to be an epic Presidents Cup venue because it asks interesting questions and allows for players to answer in a variety of ways. It makes you wonder if it was specifically designed for match play? While we may never get a definitive answer to that question, we now know what such a course would look like if it were built today.

More than 9,000 miles from Royal Melbourne in rural southeast Georgia sits the Ohoopee Match Club, a course that was specifically designed for match play.

The course in Cobbtown was developed by Michael Walrath, a New York businessman, and crafted by Gil Hanse, Jim Wagner and their crew of “Cavemen,” the amicable nickname given to the team’s shapers who handcraft features. Ohoopee opened in 2018 and already has garnered numerous awards and recognition.

The club sits on 3,000-plus acres of sand-based savannas and woodlands with the course radiating out from a collection of buildings overlooking a lake. Ohoopee offers first-class amenities and service but does so in a very casual and relaxed way. Spending a few days at OMC feels more like visiting family than it does a prestigious club. Music plays while players warm up on the range, a fire burns outside on the porch, guests toss bean bags while watching their friends finish on 18 and members serve as bartenders when the staff leaves for the night. Members and guests can stay in tastefully appointed cottages or in “the burrows” – what could be described as a trendy version of a wine cellar dorm.

The course gently weaves through different landscapes in a way that you typically only see the hole you are on. The layout is comprised of 22 holes, which the club used to make two distinctly different courses for morning and afternoon play. The Whiskey Routing, played in the afternoon and featuring a community whiskey bottle, utilizes 14 of the holes from the championship course, but often at a different angle and shorter length. It also incorporates four alternate holes dubbed the A, B, C and D holes.

What makes the design work so well for match play is the variety of the holes and the choices they provide the player. There is ample room off the tee, but usually an advantage can be seized from a particular spot. The firm and fast conditions require players to consider the ground contours that will help some shots nestle to the hole while rejecting others.

Like Royal Melbourne, OMC asks interesting questions and allows players to answer them in different ways.

At a recent gathering of golf architects at Ohoopee Match Club, I sat down with Hanse and asked about the process of designing a course for match play.

JB: How did the concept of a match play course come about?

GH: It was Michael’s idea, Michael Walrath the owner. He had reached out to us about a different site, but that didn’t work very well for golf and we were familiar with this property and turned him onto the site.

Gil Hanse (Darren Carroll/Getty Images for the PGA of America)

JB: With match play as a design objective, what were some ideas that you thought about trying to incorporate into the design?

GH: The first thing that came to mind was the finishing stretch. How do we make it a compelling finish for matches? How do we sequence the golf holes to impact the way matches might be carried out? And then the thought process of more of a heroic school of architecture approach, where you’ve got a lot of big risk, big reward.

JB: Did your mindset change at all when it came to designing the holes or the features?

GH: Here we were able to build green complexes where occasionally we focused on a particular hole location. Normally we try to build greens that are based on slope and fit into their surroundings. Here we could do that, but also have a more acute focus on specific hole locations for a match and build green complexes around that. Giving players the choice to go big or go home depending on where they were in the match.

JB: How did the 22-hole course with morning and afternoon routing come about?

GH: We had a friend out walking when we were just getting started, and he felt the routing might be too long of a walk for 36 holes. So I started looking at ways for a shorter afternoon routing and originally thought about adding some par-3 holes after the first hole, and then we talked about adding some holes out at the far end into the prairie. Jim Wagner ultimately came up with the routing and how it actually works.