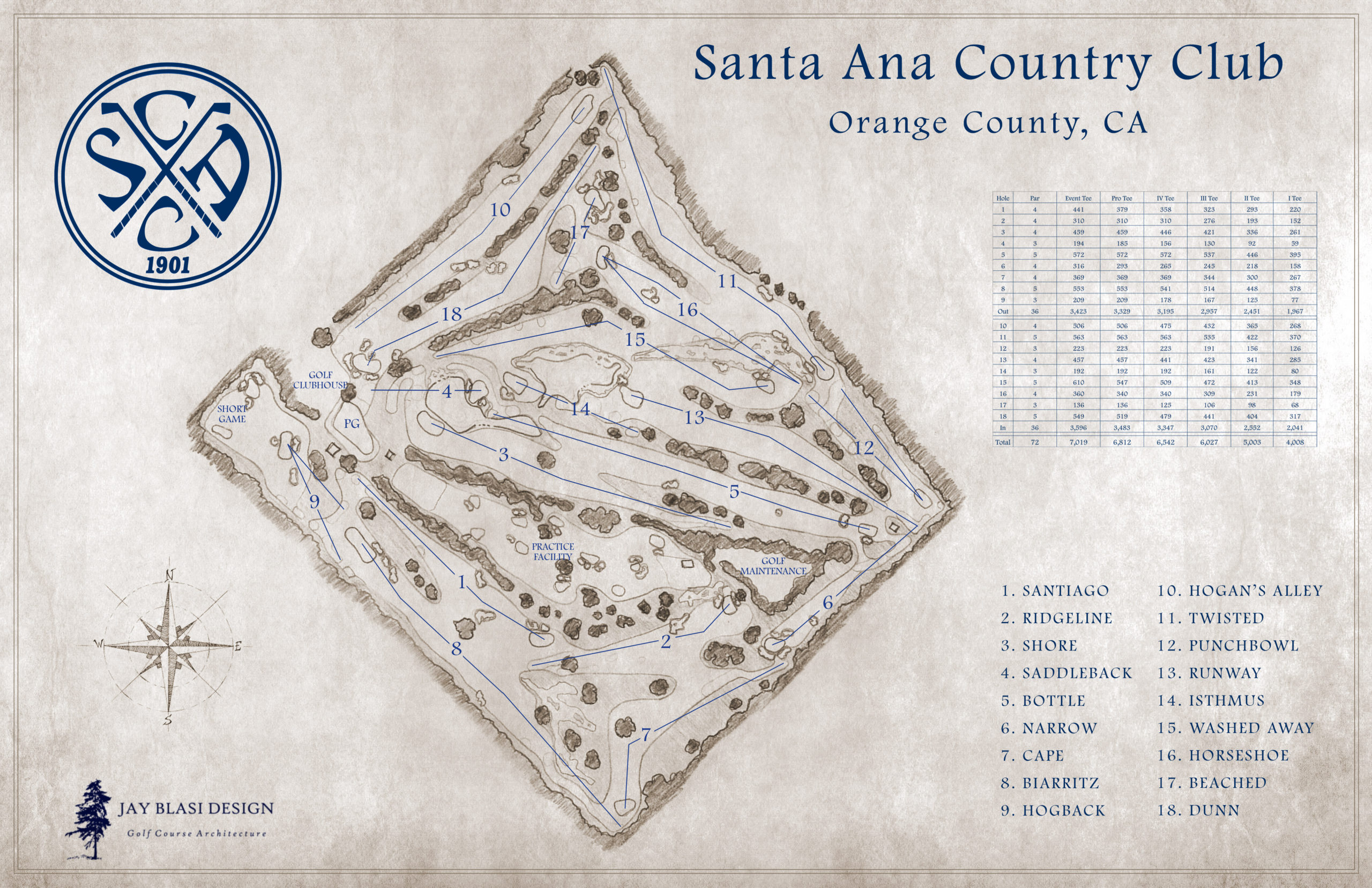 Summary: 18-hole private club located in Orange County, California. Santa Ana CC was the oldest club in Orange County and the only course that had ties to the early 1900’s. The club started in 1901 and had been at the current site since 1923. Over the decades, numerous architects and green committees had altered the course. In 2014 the course featured thousands of non-native trees, numerous lakes, a concrete-lined waterfall, multiple flowerbeds and more. The course also had safety issues with 6 holes along the boundary playing slice side out. Finally, the practice facilities were limited and ugly.

After much study we decided to reroute the whole course which would allow us to address the safety issues and create world-class practice facilities. The holes themselves were crafted to look and feel like they were from the early 1900’s.

In 2014 I received a call from Mike Pettit to gage interest in interviewing for the consulting architect role at Santa Ana CC. When I found out who else was interviewing it became clear that the club had done its homework and was interested in something good. I was honored to have been selected and from that point forward SACC became a full time job.

In the master planning and design process, rerouting revealed itself as the only way to achieve the club goals. While it took many months and dozens of different concepts, I felt great about a layout that would yield a wonderful walk, improve safety and free up space for world-class practice facilities.

The fast track nature of the construction had me move to Orange County to oversee the work. Being on site everyday allowed us to stay on schedule and gave me the time needed to make good decisions on the 1000’s of little things that come up day to day. 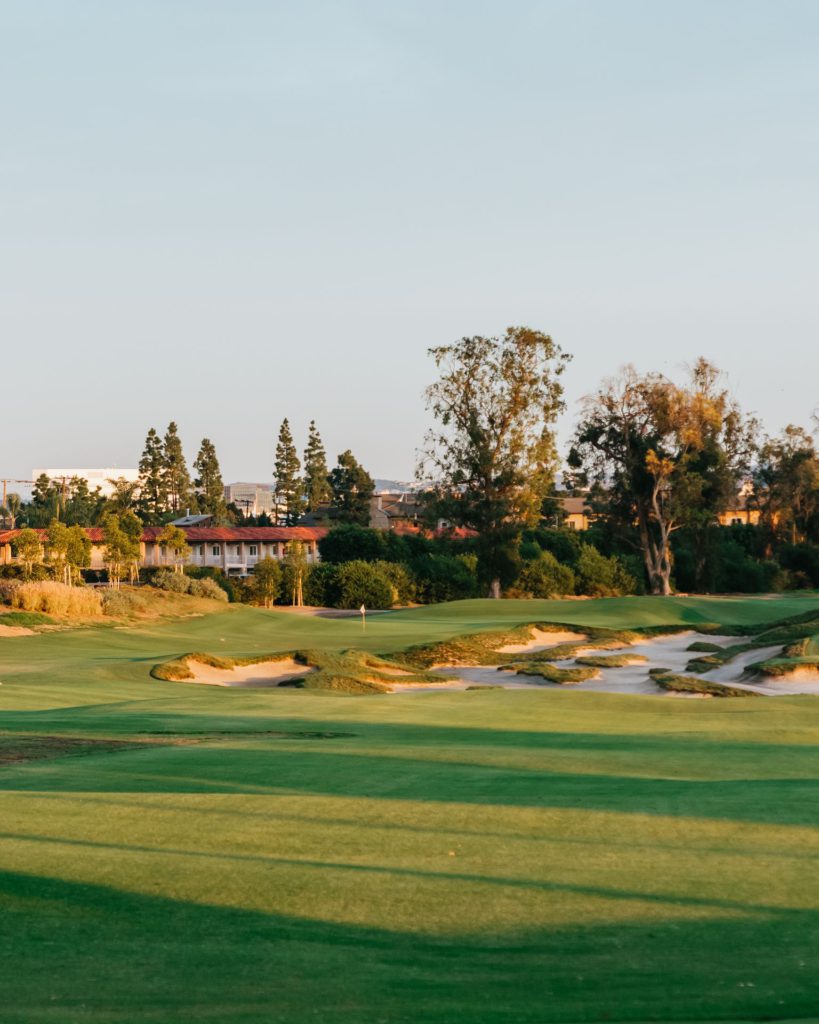 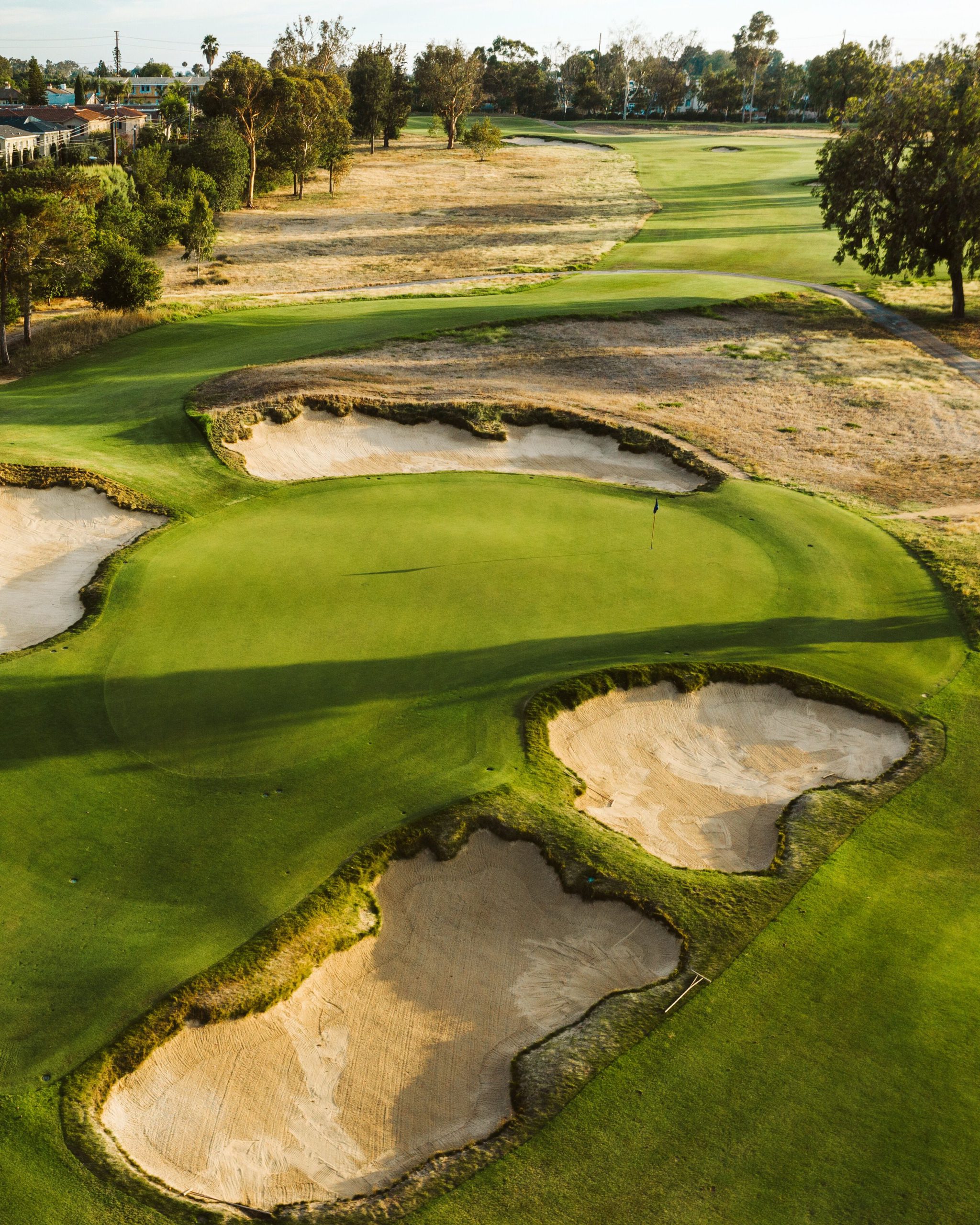 Script that links gallery to image below

Best Use of a Small Site – GOLF Magazine

I have never seen a more dramatic and positive change to a golf course as what we got to recently experience at Santa Ana CC.

I predict golf architects of the future will be studying Blasi’s greens at Santa Ana for inspiration.

What would the ideal “in-town” member’s course look like? ….. It would, in this observer’s view, look something like the newly refreshed Santa Ana Country Club.

Santa Ana Country Club is ahead of its time, and should someday be considered a role model for future golf development in the Southern California ecosystem.

“This course was perhaps the most controversial of the 2017 contestants, for reasons I don’t fully understand. Clearly, there were some members who preferred their previous Ted Robinson- redesign (of a John Duncan Dunn 1924 layout) with its waterscapes, palm trees, two-tiered greens and oval bunkers. It had been a fine layout in the 1970s and fit well with the club’s Brady Bunch- style clubhouse. Blasi, hired after an extensive architect search, was charged with making room for a true practice facility and reducing water use on the course. He rerouted all 18 holes, meshing them together through a single height of cut, all Kikuyu, retained at members’ request. He did extensive tree removal. Everything is now very wide, but some holes intersect ponds or a reclaimed natural wash that runs diagonally across the site. Blasi’s bunkering is gnarly and old-looking, but it’s his green complexes that set Santa Ana apart. Using the greens mix from the old set of greens as the base for the surrounds of his new ones, Blasi planted both the putting surfaces and the surrounds in Pure Distinction bent grass. What’s more, he shaped and contoured his surrounds in myriad ways. There are roll-offs along some edges, but roll-ons on other edges, elevated above the putting surface. From a distance, each complex looks like an enormous green and each plays that way, too, as golfers can use the tightly-mown banks and slopes off a green to work the ball toward a hole location. It’s as unusual a set of greens as I’ve seen in some time. For instance, the green complex on the par-5 15th looks like a modern-day version of MacKenzie’s notorious Sitwell Park green that tumbled down several steps right to left. I predict golf architects of the future will be studying Blasi’s greens at Santa Ana for inspiration. His new practice facility is first-class, too. Now if they’d only do something about that Brady Bunch clubhouse.”

“Jay Blasi is known for the design contributions he made to Chambers Bay while working for Robert Trent Jones II. Now he’s pulled off quite a feat of his own, taking the 115-year-old Santa Ana Country Club from the ho-hum, resorty layout it had become and turning it into a Golden Age look-alike and play-alike. The SoCal classic now features creatively contoured greens, firm, fast, rippled fairways, handsome bunkers, and sandy washes that yield provocative strategy options. Credit to Blasi and the club for getting so much out of 125 acres.”

“Over my three plus decades of working for the USGA I have had the honor of visiting and playing numerous golf courses all over the US. When renovations are completed they have ranged from very good to less than desirable. However, I have never seen a more dramatic and positive change to a golf course as what we got to recently experience at Santa Ana CC. Your golf course architect has taken the weaknesses of the golf course and created a very memorable layout. From the dramatic vistas of the mountains to the very interesting green complexes and multiple options from the tees, Jay Blasi has created a golf course that rivals many of the more noted courses in the Southern California area. There is no question that the changes that have been made are all positive from a turf growth and playing standpoint. My sincere congratulations on a job well done to you and those that backed this outstanding change to the golf course. Your entire membership should be justifiably proud of the results as the course matures in the coming year.”