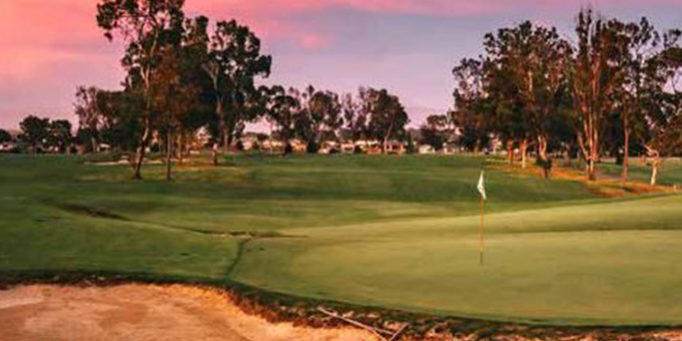 SOME GOLF COURSES ARE BORN TO BE CLASSICS. Others have to be redesigned that way. Santa Ana Country Club falls into the latter camp. Orange County’s oldest golf club has a proud, 119-year history, yet it never truly had a golf course worthy of its venerable status — at least until 2016. Thanks to a committed membership and the design skills of architect Jay Blasi, the club now has a collection of golf holes that look and play like a vintage Golden Age layout from a century ago.

Santa Ana CC started life in 1901 as a nine-hole facility called Santiago GC in Peters Canyon, where it remained until 1914. At that time, it morphed into Orange County CC and relocated to the bluff-top Castaways property in Newport Beach with 18 holes and oiled-sand greens. In 1923, water woes forced another move, this time to its current location. The club was reorganized as Santa Ana CC and in September 1924, it opened nine holes, followed by the second nine one year later. Prolific architect John Duncan Dunn, a Scottish transplant, earned design credit, but some sources indicate that the club’s own Charles G. Twist and A.C. Twist (brothers from England) actually laid out the holes with help from fellow members and submitted the plans to Dunn for a consult.

From 1924 through 1961, members played the “Dunn” course with frequent, if minimal changes. While not the most demanding examination, it proved sufficiently challenging (as a 1933 scorecard shows) to test players at 6,300 yards with strong bunkering and small greens. Among those who rose to the challenge was future PGA champion, SCGA Hall of Famer and “Mr. 59,” Al Geiberger, who captured the SCGA Amateur here in 1956.

Beginning in 1962, however, a combination of preference and necessity transformed Santa Ana. No fewer than nine different architects fiddled with the layout. Lakes replaced barrancas (dry washes) that had influenced play, both strategically and aesthetically. Non-native trees and ornamental flowers were planted — and overplanted. Bunkers were added, deleted, reshaped and relocated. Trendy mounding and green construction replaced the low-profile green complexes that had defined the course. In short, it wasn’t unappealing, in a modern Palm Springs resort course kind of way, but things simply didn’t mesh.

In 2013, Mike Pettit led a group of members who recognized the disconnects and who pushed for a comprehensive redesign. Enter Jay Blasi, the Wisconsin-born, Los Gatos–based architect who served more than 10 years in the employ of Robert Trent Jones II and was instrumental in the design of Chambers Bay in University Place, Wash., site of the 2015 U.S. Open.

“In order to achieve the members’ goals, a new routing was needed,” said Blasi. “That was the only way to improve safety on the perimeter and find enough room for a full-length practice facility. We also reduced the overall irrigated turf by 30-plus acres which gave the course a more natural appearance and significantly reduced the water use.”

The term “rerouting” proved to be a euphemism. Blasi essentially created a brand-new course, one that resembled a Golden Age layout from the 1920s. “We removed many of the artificial elements, such as waterfalls, flower beds, non-native trees, lakes and railroad ties and tried to craft a golf course that looked more natural,” said Blasi. “Native grasses frame the holes and the greens and tees blend together seamlessly. The OC has lots of resort golf and lots of modern golf. Our goal was to craft something that looked like it had been there a hundred years.”

Indeed, what resulted from the transformation is a layout that harmoniously embodies the virtues of a century-old classic course. Par is 72 and from the Pro tees, measures 6,812 yards; though for events, it can be stretched to more than 7,000 yards. Blasi observes that the key architectural feature is the intricacies of the green complexes, which require that a golfer be mindful of how the ball will behave once it hits the ground. Most holes can be accessed via ground or air; often, the best way to get to the hole is to use a slope.

By definition, a classic course comprises classic holes. Santa Ana CC is no exception. Number 2 is an early-round barometer of risk-reward judgment. Called “Ridgeline,” the slight dogleg-left, 310-yard par 4 is special to Blasi because, “I can’t think of a hole anywhere that is like it. Players have choices off the tee, on the approach and around the green.” The hole is drivable for the low-handicapper, but Pettit cautions, “You have to catch the slopes by the green just right or you will find trouble in greenside bunkers or awkward slopes.”

At 506 yards, the par-4 10th is a level, straightaway hole that plays downwind to a deep, skinny green where the back half is two feet below the front half. Named “Hogan’s Alley,” this hole occupies ground where Ben Hogan used to practice in 1942 when he was stationed across the street at the Santa Ana Army Air Base (now the Orange County Fairgrounds). Hogan played the course often, as did New York Yankees star Joe DiMaggio, who was also stationed at the base.

THE OC HAS LOTS OF RESORT GOLF AND LOTS OF MODERN GOLF. OUR GOAL WAS TO CRAFT SOMETHING THAT LOOKED LIKE IT HAD BEEN THERE A HUNDRED YEARS.” — Architect Jay Blasi

That same year, 1942, saw a gala and golf exhibition on Oct. 25 for the Army Emergency Relief Fund. Bing Crosby, Bob Hope, Fred Astaire and Johnny Weissmuller (Olympic Gold Medal swimmer and Tarzan of the movies) were among those trading chips and quips that day across Santa Ana’s fairways. Sam Snead, the PGA Championship winner, drove up from his post at the San Diego Naval Training Station to tie Jimmy Thomson in the Long Drive contest at 300 yards, while Babe Didrikson Zaharias belted a poke of 275 yards and shot 75 during the competition.

Santa Ana’s bentgrass greens vary widely in size, contour and configuration, though many are set on diagonals to place a premium on achieving the proper angle for the approach. Among the standouts are the Biarritz-style green at the par-5 eighth, with a swale in the middle and a plateau front-left; the punchbowl at the long par-3 12th; and a horseshoe-shaped putting surface at the par-5 18th that’s wrapped around a classic “Lion’s Mouth” bunker.

Strategically, some of the best holes, such as the 11th, 13th, 15th and 16th feature the restored wash. With the color and texture of native grasses fringing the wash, the holes now reflect a more natural Southern California environment. The 563-yard, par-5 11th is noteworthy to Blasi because it was a challenge to create. “The hole plays backwards through what used to be holes seven and eight,” said Blasi. “There were big trees that needed to come out, a pond to remove, apartments to screen and more. But the hole is a fun double-dogleg that looks beautiful and is fun to play.”

Another double-dogleg par-5 that impresses is the 15th, which can play up to 610 yards. With the wash on the right off the tee and on the left at the green, it’s an equal opportunity hazard. The Saddleback Mountains in the backdrop complete a stirring picture.

Hole 17, “Beached,” measures just 136 yards from the tips, but both Blasi and Pettit list it as a favorite. Blasi notes that the green is a variation of a “double plateau,” with a high left side, low middle and high right side. The right “finger” of green actually falls off into sand. Hit the green on the wrong portion or miss it entirely and it’s tough making par. As Pettit put it, “This gem isn’t long … but you might have to fly it to a back shelf, or try to skip it up there, or you might have to hit the right part of the slope to get it close to a pin in the middle saddle. Each day is a new adventure, and you have to decide whether you’ve got your ‘A’ game and how aggressive you want to be.”

One of the most popular annual events at Santa Ana CC is the Young Associates Christmas Tournament. With a mix of liquid holiday cheer and competitors adorned in Christmas garb, it sells out every year. Decked out with a new course design, members must feel like every day at Santa Ana is Christmas.

Pettit, club president King Nelson and a passionate group of members had a mission to manufacture Golden Age greatness from a crazy quilt of design traits set atop admittedly hallowed ground. “I was trying to convince the club (and did) that we needed an architect and that we needed to follow a specific architectural style, not have plaid drapes, paisley chairs and various period pieces that weren’t related to each other,” said Pettit.