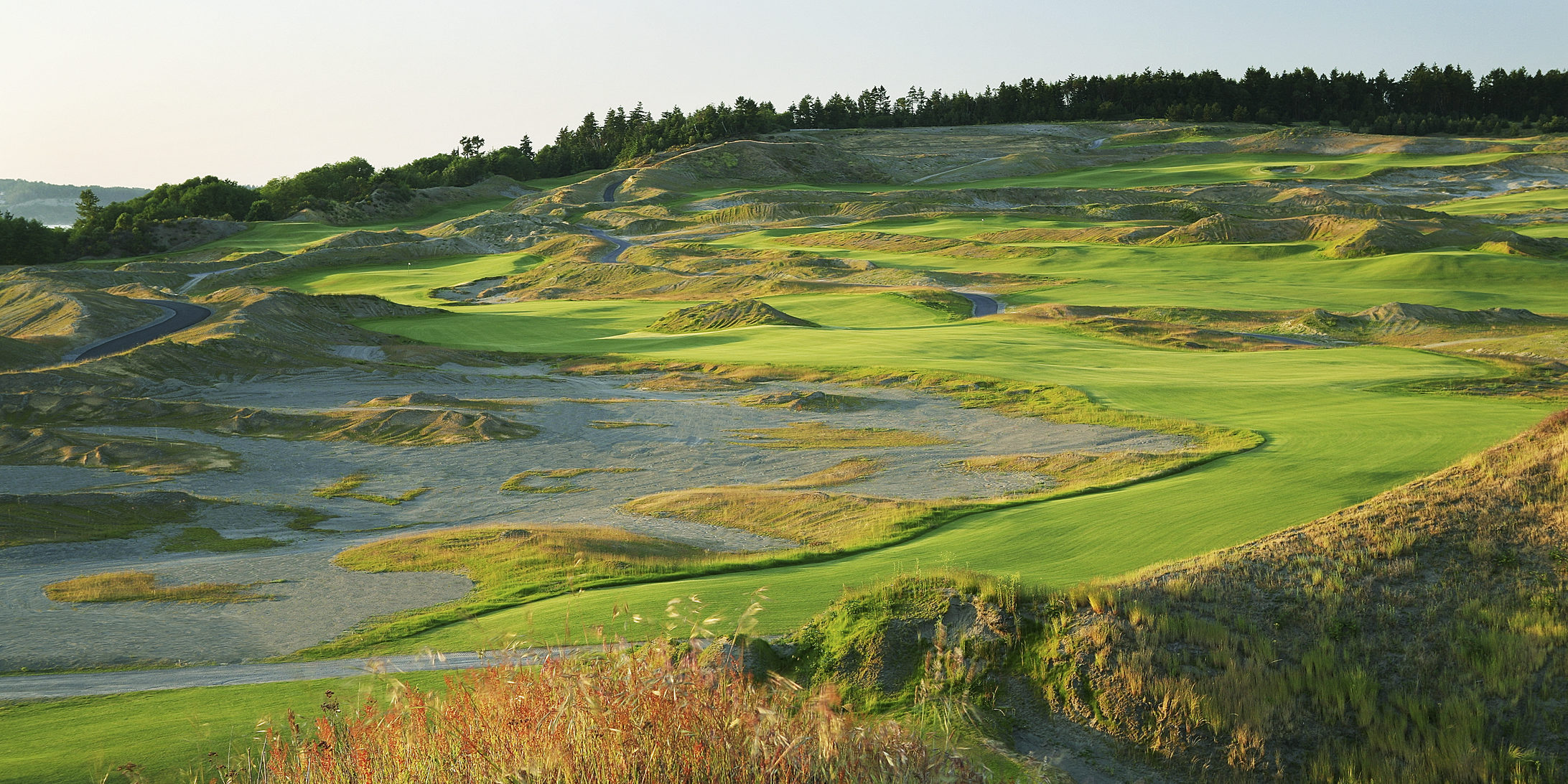 Chambers Bay
Chambers Bay provides a unique golf experience along
Puget Sound that is challenging, enthralling and above
all, great fun
By: Hunki Yun

There is nothing small about Chambers Bay, from the size of its expansive site on Puget Bay, just south of Tacoma, Washington, to the views of the Olympic Mountains beyond, to the impact the course has had on the local community and to the golf world.
Biggest of all is the dream of vision of two of my playing partners for my inaugural round at the course that will host the 2015 U.S. Open, an announcement that was made just eight months after the course opened in June 2007.

John Ladenburg is the Pierce County Executive. He was the man who thought that a gravel pit that the county purchased 20 years could be transformed into an epic course that one day would host the U.S. Open. Fighting the understandable skepticism and opposition from a municipality with little golf history and tradition, Ladenburg power brokered his vision into reality.

He did so by hiring my other playing partner, Jay Blasi, an architect in the firm of Robert Trent Jones II. Blasi grew up in Wisconsin, and in an interview in his high school student newspaper, he stated his goal of designing a U.S. Open course. Working with Robert Trent Jones Jr. and Bruce Charlton, Blasi accomplished his goal at Chambers Bay-his first project as a designer.

Chambers Bay is one of the greatest debuts in golf history. Blasi’s achievement is as remarkable as Tiger Woods’ 1997 Masters victory, a 12-stroke rout in his first major as a professional.

Blasi’s creation is a wild journey, a 7,585-yard romp through dunes and waste areas and up, over and down hills and bumps, most of which were meticulously crafted as to look as if swept by the wind. The fairways are wide-100 yards in spots-but there is seldom a flat lie anywhere, even on the tees, which are as freeform as the rest of the course.

The result is the antithesis of target golf. The fescue grass encourages hitting the ball along the ground whenever possible, using the slopes to feed the ball to the hole. On nearly every hole, the best way to leave tap-in birdies is to hit approaches sometimes as much as 40 yards away from the target, even farther away in the wind.

Most of these shots are intuitive, as the landscape provides subtle cues. But sometimes local knowledge is a huge plus, and between my caddie and Jay, there were certain shots I never would have considered. For example, following a poor drive and a lay-up on the 508-yard par-4 7th, which rises 45 feet from fairway to green, I had a shot of 65 yards to the hole. But my caddie, Nate, suggested, hitting an 80-yard shot 20 yards left of the hole.

I did as requested, and the ball caromed off a hill behind the green and wound up inches from the hole for a tap-in par. Using the slope certainly was the play at the 172-yard 15th, which has the course’s iconic lone fir behind it.

The tree was vandalized a while back, but it has recovered and is as healthy as ever. In a sign of how much the community has come to embrace the project and property, Landenburg says he received hundreds of e-mails from people offering assistance.

On the day I played, the tree was witness to a remarkable feat on the 15th, which played 127 yards from the regular tees: back-to-back aces. We were on the 2nd hole, when he heard a roar from the tee, about 500 yards away. (There was another hole-in-one on the hole later in the day.)

Chambers Bay provides fun with the ground game, and although the site isn’t a true links, the course plays firm and fast, harkening back to the origins of the game. (In 2015 players essentially will have two British Open experiences.)

But there is little doubt the course is thoroughly modern, with four par 4s of 498 yards or longer (and the 534-yard 13th likely will be converted to a par 4 for the Open without much loss of yardage).

And although only two holes-the 425-yard 16th and 218-yard 17th-play along the sound, the water is in view from every hole.

Put it all together, and Chambers Bay provides a unique experience that will continue to enthrall, enchant and challenge golfers up to the 2015 U.S. Open and beyond.