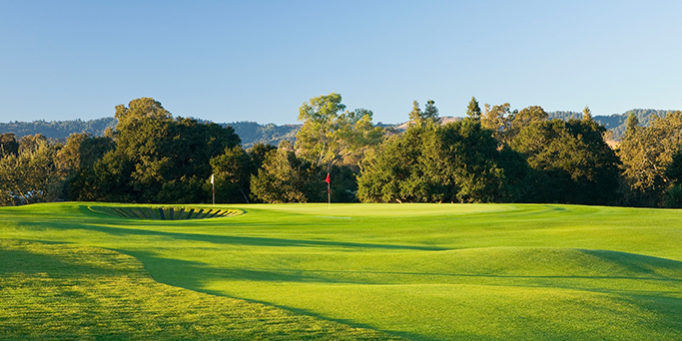 Many of the practice facilities being built for college golf programs feature a clubhouse strictly for the teams and coaches, some of them quite elaborate.

Stanford University’s new facility is not among them. There’s no fancy building with offices, lockers, lounges, big-screen TVs, computers, etc.

All the Cardinal has at its outdoor, on-campus facility is arguably the best practice area in the country – college or otherwise.

While attending last month’s U.S. Intercollegiate at the Stanford Golf Course, I had the opportunity to attend the grand-opening ceremony for the Siebel Varsity Golf Training Complex. After taking an in-depth tour of the layout, I came away impressed. As has everyone else I’ve talked to who has seen it.

The complex is located on 30 acres of previously undeveloped land adjacent to the course. The most distinctive feature is its six greens, each inspired by a different architectural style, complete with native grasses, bunkers and various sand textures.

It is a tag-team effort between Stanford, men’s and women’s golf coaches Conrad Ray and Caroline O’Connor, and Robert Trent Jones II Golf Course Architects, which has its international headquarters in Palo Alto.

The concept for the project was to provide practice conditions that emulate actual conditions the teams encounter during competitions throughout the country.

“We feel we’ve given the players every shot they’ll see around the country,” said Jay Blasi, project architect for RTJII. “Out here, you are only limited by your creativity.”

The training complex, located adjacent to the No. 2 fairway at the Stanford course, is laid out in an L-shape, with two 400-yard sections – one 200 yards wide, the other 100 yards wide. Greens are placed strategically around the perimeter. All six greens can be used at the same time that other players are hitting into adjacent landing areas. Or, players can hit to greens from a variety of approaches.

“This is incredible,” said Cricket Musch, a Nike Golf rep and the former men’s golf coach at Texas-El Paso. “You can’t describe it and do it justice. You have to see it for yourself.”

About three years in the making, the pricetag, according to Ray, “was somewhere between $6 million and $7 million dollars.” The money came from private donors – the largest being Tom Seibel, for whom the complex is named. Believe or not, former Stanford golfer Tiger Woods is not among them, although Ray says Woods “has stayed very close to the project.”

Said Ray: “For all of us involved with golf here at Stanford, this is a dream come true. It has everything anyone could want to become a better player.”

The land for the complex was donated by the university. To get 30 acres at no cost on any school’s campus is all but unheard of. And this is prime California acreage. I’ve heard some locals close to the situation estimate the land value in the range of $1 million per acre.

“This has been a great project, a labor of love, from the beginning,” said Stanford athletics director Bob Bowlsby. “Our partnership with RTJ II has been extraordinary. We are very fortunate to have a lot of people around Stanford who have vision, passion and resources to make something like this happen.”

The facility was built strictly for the men’s and women’s golf teams at Stanford. Bowlsby said any use other than by golf team members would have to be approved through his office.

Talk about a great recruiting tool for Ray and O’Connor.

“Truly we believe this is the most spectacular practice facility in the world, not just college golf,” O’Connor said. “If you’re looking at a place to practice and improve your game and this doesn’t impress you, nothing will.”

It certainly has impressed opposing coaches.

“I know there’s a lot of great practice facilities out there now and more in progress, but this one definitely raises the bar to a whole new level,” said Oregon State coach Brian Watts. “I mean, how can I compete with something like this? How can anyone?”

Casey Martin was a member of the 1994 NCAA Championship team at Stanford and now is the golf coach at Oregon. He played professionally for a number of years, including stints on the PGA Tour and Nationwide Tour.

“This is by far the finest practice facility I have ever seen, and I’ve seen a lot of them,” Martin said. “It’s just amazing what they’ve done here. I only wish we had something like this when I played here.”

So don’t feel too sorry for the Stanford golf programs because their practice facility doesn’t have a pretty clubhouse with a lot of bells and whistles.

If you’re wondering, the reason there’s no clubhouse is that the land currently is not zoned to have such a building. But Bowlsby indicated that could change and something could be built in the future. After all, this is Stanford. Where there are golf-savvy people with big bucks and a lot of influence.

Is there some sort of clubhouse in the future for this elaborate practice facility? Bet on it.

FIRST THINGS FIRST: Wake Forest senior Webb Simpson plans to turn pro immediately after the NCAA Championship. But he has some unfinished business to take care of first.

Simpson, the No. 1 player in the Golfweek/Scratch Player World Amateur Ranking, wants to go out with an NCAA title. He will enter upcoming NCAA regionals coming off a 14-under performance last month in winning his first ACC Championship.

“I think I’m in a pretty good groove right now, and I’m really looking forward to the NCAA tournament,” he told The News & Observer of Raleigh, N.C. “I’d love to finish up my college career with a good showing in that. It’s awfully hard to win, but you have to set goals and that’s one I’ve always had,” he said.

Simpson, 22, expects to turn pro immediately following the NCAA finals May 28-31. After trying to qualify for the U.S. Open, he will seek sponsor exemptions or attempt to Monday qualify for PGA Tour and Nationwide Tour events.

Why it’s important: Charlotte, No. 6 in the Golfweek/Sagarin College Rankings, wants to take some momentum into NCAA regionals with a good performance here. . The 49ers, a prohibitive favorite to win its third consecutive A-10 title, would be the first to accomplish the feat since Penn State won five consecutive from 1986 to ’91. Richmond (No. 122) and Xavier (No. 140), last year’s runner-up, have the next-highest rankings.

Why it’s important: No. 34 Kent State, coming off two consecutive victories and five top 5s in a row, seeks to continue its recent success. The Golden Flashes won the MAC title in 2005 and ’06. Eastern Michigan won its first conference crown last year, and is ranked No. 83 entering this year’s event.