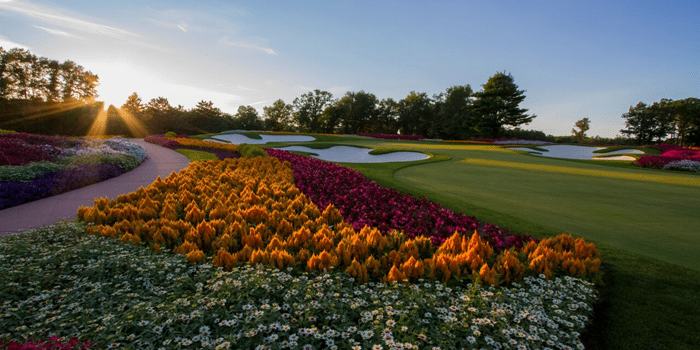 SentryWorld, located in the central Wisconsin town of Stevens Point has long been known as the state’s first true golf destination. This area, commonly referred to as the “Gateway to the North Woods” is the link between the rolling farmlands of the Badger state and the lake country to the north. The vision for this grand daily fee parkland layout originated with the late (and former Sentry Insurance Chairman) John Joanis. Joanis hired Robert Trent Jones Jr to design this midwest beauty that opened to rave reviews back in June, 1982.

It was Joanis and RTJ II’s collaboration that led to the creation of the Par 3 signature sixteenth known as the “Flower Hole”.

After a damaging wind storm destroyed numerous trees on the 200+ acre property over a decade ago, Sentry contacted RTJ II Design to come back and evaluate what was needed to restore SentryWorld to it’s former glory. The firm summoned its young and talented design associate (and native Badger) Jay Blasi to make the assessment.

Blasi informed the leadership at Sentry that the storm actually was beneficial to the course and suggested the removal of a thousand additional trees (thus allowing for open corridors, angles for more strategic play and improved air flow & sunlight exposure for healthier turf). Also, upon further discovery, Blasi learned there was a serious need to replace the outdated irrigation system, drainage, bunkers, and many of the green complexes. Finally, in 2012 new Sentry chairman Pete McPartland came on the scene with passionate energy and big picture vision to implement the plan that was previously outlined.

There was really only one hurdle to leap for McPartland to bring it all to fruition – RTJ Design was the company commissioned to do the renovation, but Blasi was no longer part of their stable, he had left and started his own firm (Jay Blasi Design).

Blasi was McPartland’s choice to oversee and implement the major improvements to the course. To make a long story short, McPartland made it happen, Blasi would be his point guard on the renovation as the Project Architect (along with RTJ II designer Bruce Charlton). To spend an hour with Pete McPartland is to realize that this is a person, and a leader of the highest order (a lunch meeting with Jay and Pete is not just a treat, it’s an honor).

Blasi and the RTJ staff quickly got to work, Jay himself spent the better part of 28 straight weeks on the property. The removal of trees opened up site lines, vistas and enhanced the strategy elements for better players – thus, also allowing for more enjoyment for all ability levels. Also, several hole routings were changed or modified – utilizing some parcels of land that were previously untouched. For those playing the forward tees, the distance was reduced to 4696 yards to increase enjoyment. The challenge for those who aspire to conquer the sternest of tests (from the back tees) was increased to 7145 yards. The new expansive driving range no longer faces the early morning sunrise glare of the east, and accommodates a greater number of enthusiastic linksters.

The renovation completely closed the course for two years, in the fall of 2014 the facility re-opened for a preview. But it wasn’t just the course that re-opened, McPartland and the Sentry Company went a giant step further, they decided to created an entire mega complex, devoted to golf, tennis, outstanding local cuisine, and the best reception facility in the area for weddings, banquets and corporate meetings. A jewel that would serve not only as a company asset but also as a community treasure.

PJ’s restaurant serves up the local flavor. Anything with cheese in Wisconsin is a big hit, as well as the native fresh catch. Jay Blasi’s go to comfort food when in town is the tomato soup and grilled cheese. I chose the soup as well, along with cheese curds and salmon tacos. For just getting off the plane and driving 2 1/2 hours from Milwaukee (we were in town to also cover the U.S Open and visit Sand Valley) – this was the perfect pre-round experience. Delicious is an inadequate description of how outstanding the food is here (outstanding service as well).

The staff were setting up for a large reception during our visit, this is one of several halls equipped to handle any special occasion at SentryWorld.

1st Hole – Make sure you get a good warm up, SentryWorld starts off with a challenging 424 yard dogleg left par 4 (blue tees).

2nd Hole – One of the new designs at SentryWorld is the 473 yard par 4 second. Easily the bully of the front 9, Blasi used part of the old eleventh to craft this hole that offers great flexibility for tournament play (it can play as a 598 yard par 5 for professionals). A long accurate approach shot is required here, the green offers a fair amount of back to front slope.

3rd Hole – Any sign of significant elevation change is absent at SentryWorld, but harmonious natural surroundings like this “infinity green” at the par 3 – third is an early indicator of how special the experience at SentryWorld will be. Once a vacant pocket in the woods, this lakeside parcel is now the setting for the shortest hole on the property. At 151 yards from the tips, it’s the perfect chance to catch your breath after the challenge of the opening holes.

4th Hole – The 299 yard fourth is a fabulous example of a risk reward drivable par 4. Avoid Blasi’s subliminal invite to go for the green and play less club to the proper position on the right side of the fairway . . .

. . . here’s the correct angle for an easy wedge. *Blasi took on his own challenge and paid the tariff when his well-intentioned high draw fell just short of clearing the hazard. I chose the less risky route, but taking the “low hanging fruit” option doesn’t require an apology after notching the first circle on the card.

7th Hole – The par 3 seventh is the toughest of the one shotters at SentryWorld (it played 211 yards during our visit) the slightly elevated shallow green requires the proper club selection. Avoid any tucked pin location here and aim for the center of this green, 3 is a great score here.

8th Hole – The 340 yard eighth is another example of variety at the new version of SentryWorld. This tight tree lined hole lends itself to precision over might. The superb flash bunkering does a fabulous job of framing the landing areas and defining depth. Simple beauty, nothing tricky here.

9th Hole – The re-designed 508 yard par 5 ninth gets my vote for the most fun hole on the property. Using the original tee and green locations as well as the existing creek, the design team crafted a fairway slot down the right side to encourage aggressive play to this well guarded green. Although it’s listed as a long par 4 for professionals, I personally don’t think it should be, the hole has a thirteenth at Augusta like essence – it’s beauty and temptation all neatly wrapped in one glorious setting . Hit two masterful shots and you’re likely rewarded, miss just slightly (as I did) and you’ll be kicking yourself for ruining a good opportunity to get healthy on the card. My immediate thought after walking off that green was I want to play that hole again.

Another view of the ninth, this one from behind the green shows all the elements of strategy, beauty and recovery.

10th Hole – Although the tenth offers back to back par 5’s on the card, this is an entirely different test than the ninth (playing 612 yards from the back tees), survival is the theme here – par is a solid score on this monster dogleg right.

11th Hole – If there is a drivable par 4 on the course to take on – it’s the new eleventh. It Played 280 yards during our visit, and features a green that’s now located in front of the water (previously it was tucked further back and right of the hazard. Longtime RTJ II designer and SentryWorld co-project architect Bruce Charlton gave his thoughts on the hole, “Creating the new eleventh really allowed us to focus on increasing the fun factor”. Pick the appropriate tee (who says you can’t move up a box to make the hole more of a risk reward challenge) and smash a low bullet fade tee shot that leaves nothing more than a chip and putt to this well undulated infinity green. This well crafted design gives you every chance to put another circle on the card.

12th Hole – Perhaps the biggest change to the updated design at Sentry World is the 139 yard (161 yards from the tips) par 3 twelfth. Located in a previously unsullied parcel on the property, the design team created a fantastic short par 3 on a peninsula that requires your full attention – especially if the wind is blowing (Blasi striped his mid-iron shot here that played much longer than the number thanks to a stiff hurting breeze that came up just as we reached the tee). Don’t over club as I did here, plenty of room has been provided to the left for a viable path to escape with par.

14th Hole – A view of the green complex at the par 5 fourteenth shows off the variable patterns and heights of cut – brilliant work by Superintendent Matt Smith and his grounds staff. *Look for our Q&A with Matt Smith coming soon in our “Masters of the Moss” section.

The presentation of colors at the “Flower hole” can be distracting to the task at hand, so take a few photos and enjoy the scenery on this one of a kind mid- length (168 yard) par 3 that was inspired by RTJ’s visit to Holland’s Tulip festival just before getting started on the original design 35 years ago. Blasi and I took a few minutes to discuss the flora and all of its splendor, then settled back into our match that was knotted up at All Square.

Ground level view of the hole gives you a better idea of just how much effort the Agronomy/Landscape staff put in to create this iconic scene each spring.

17th Hole  – The new seventeenth hole is a much friendlier than the previous version with more room off the tee and a short approach to a severely sloped green that runs away from the player. This view from behind the green is among the most serene at Sentry World.

18th Hole – The 18th tee, a 439 yard uphill right to left dogleg is a worthy finale. Midwest conifers and evergreens guard the corner, while fairway bunkers on the right catch any flared drives that fail to draw. Your two best are required here to finish strong.

The back center pin sits just over a rise on a shelf, an uphill recovery from short of the green allows for an aggressive shortgame play – miss this green deep, and the round will likely end with a miscue.

SentryWorld is a must play when traveling to the midwest. If you’re planning a Wisconsin golf vacation, put this re-imagined parkland Top 100 daily fee gem on your list, and tell them who sent you . . .