Ask the Pros: Chambers Bay project architect Jay Blasi on what to expect at the U.S. Open 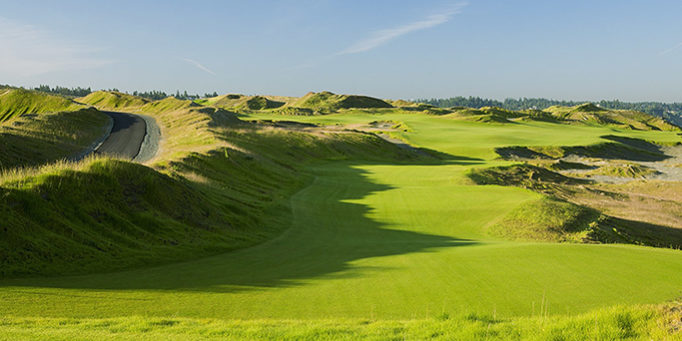 Robert Trent Jones II is the architect of record at Chambers Bay, the 2015 U.S. Open host course in University Place, Wash., near Seattle. But like most big-name designers, he has a whole team that works for him, including Jay Blasi, now 36, who served as the project architect.

Blasi, a Wisconsin landscape architecture graduate, was involved in all aspects of the design from concept through construction. From 2004-2007, he worked directly with the shapers in the field on the details of the greens, bunkers and grass lines on the course. So he knows every bunker, every contour and how the course is designed to play.

How important is Chambers Bay to Blasi? He and his wife Amy got married there on July 31, 2010. And in 2013, after 10 years working with Jones, he opened Jay Blasi Design in Los Gatos, Calif., and chose the Lone Fir from Chambers Bay for his company’s logo.

Blasi actually attempted to qualify for the U.S. Open but finished T-71 in the local qualifier at the Stanford University golf course in May.

We asked him what he thinks of criticism that has been levied at Chambers Bay, how the course will play, and what kind of player will fare best.

Golf Advisor: The USGA made its ground-breaking decision, of course, just eight months after completion to host the 2015 U.S. Open on this very nontraditional American course, but why did the design team decide that a links course was the best option for this property?

Jay Blasi: Before we were awarded the job, we had been on the property, studied the site (an old sand and gravel mine), put together conceptual plans and from that early stage we had talked about creating a true links golf course, using fescue and not a watered-down Americanized version of a links course.

Golf Advisor: What was your impression when you arrived in late 2003?

Jay Blasi: Like many golfers who come now to play it, I was awestruck by the scale of the property. You look out from the bluff, it looks like a big pit, and you see little specks down in there, and then you go down into the pit floor, and you realize that those little specks are 40-foot-tall concrete walls. And those dunes that just look like an undulating landscape, those sand stockpiles left from the mining operation — you realize some of those are 60-70 feet tall.

Golf Advisor: Some of the tour players have been pretty outspoken in their criticisms. Ryan Palmer called it “a joke,” and Ian Poulter, who hasn’t even been there yet, tweeted it was “a complete farce.” Do these reactions surprise you?

Jay Blasi: Not surprised in the least. Everybody who’s been involved in the project from the time before it opened was fully expecting and keenly aware that the golf course is different. For those whose livelihood depends on what happens to the ball after it hits the ground, I think we all expected that they would prefer a course where they can stand out at 230 yards and hit their shot and know that if they fly it 229, it’s going to stop right at 229. This golf course is different, and it was different from day 1.

Golf Advisor: But isn’t the U.S. Open supposed to identify the best player in the field? If players aren’t embracing this style of golf, do we truly crown the best player?

Jay Blasi: The only thing we really have to go on is the (2010 U.S.) Amateur. And when you look at the Amateur, the no. 1 player in the world (Uihlein) beat the no. 2 player in the world (David Chung) in the finale, so we felt that was certainly a great barometer. Whether that holds true for the U.S. Open is yet to be seen.

Golf Advisor: USGA Executive Director Mike Davis has strongly advised that players come out in advance and play the course a few times. Are players who don’t come out early at a distinct disadvantage?

Jay Blasi: It really boils down to how any player plays that given week. But I think really what he was getting at is that the golf course is different than what a tour player will play week in and week out in just about every aspect. The fairways at the U.S. Open are usually narrower than they are in regular events on the PGA Tour. These are going to be much wider than they are on the PGA Tour. The grass is different. Some of these guys may have never played on fescue before.

Golf Advisor: What about Ryan Palmer’s assertion that the tee boxes present uneven lies, which he says is “ridiculous”? Why were they designed to be that way?

Jay Blasi: I find tees to be the most unnatural part of the golf course. You never find a perfect flat circle or a perfect flat rectangle out in nature. And so the idea of having tees with undulations was to try to let them blend into the landscape so they wouldn’t look like these artificial elements. What you really have is one big, giant field of golf and within that field — we refer to the tees as ribbon tees because they’re like a ribbon of the fairway — and within those ribbon tees there are flat spots and spots with undulations.

Golf Advisor: So other than making the tees blend in, why are the teeing grounds so large?

Jay Blasi: When we worked on this, my desire was to have the golf course played only as a match-play golf course with no tee blocks at all. I wanted the golfers to come out, play a match and whomever won the hole before would get to decide where to tee off on the next hole. So you have these big ribbons of tees with flat areas and uneven areas. The idea was players could choose a spot that was advantageous to them. If it was dogleg left, and they wanted to find a little side slope to help them hit the draw, they could do that.

Golf Advisor: What about the concern that the course is mowed at the same heights making it difficult to identify the edges of the greens? That’s important in terms of cleaning and marking the golf ball, leaving the flagstick, etc.

Jay Blasi: For day-to-day play, they often mow at different heights, but there’s no doubt that they’re not only rolling the greens but off the greens as well. So yeah, you can’t distinguish the green from the surround at this point. (Blasi deferred specific setup questions here to Davis.)

This has been done before where they’ve painted the edges, there’s an official with every group; so yes, there may be rulings on this. But from a playability standpoint, I think it’s spectacular.

Golf Advisor: Where are the most interesting holes for this U.S. Open?

Jay Blasi: There’s a stretch on the front nine that’s going to be very, very difficult — holes four through seven. All have the potential to be 500-yard par 4s. Some of them have major elevation change and major trouble. I think somebody could come up with a good phrase — suicide run or whatever you want to call it. If you can get through 4-7 in 1-over, you’re probably gaining on the field.

Golf Advisor: Talk about the flexibility in setup on this course.

Jay Blasi: Flexibility in setup I think will provide a lot of drama. On almost every single hole, Mike (Davis) can move the tees up or back around 120 yards. There’s a number of holes where he’s got alternate angles he can use, different elevations. I think some of that drama will come from the change in setup on a day-to-day basis. And certainly the finish will be exciting as well. You’ll have the ability for drivable holes (12 and 16) on certain days, all sorts of wild things, all set along Puget Sound.

Golf Advisor: No hole seems to have more options than the par-3 ninth, right?

Jay Blasi: There’s been a new teeing ground added since the Amateur. On one day, the hole will probably play 227 yards, and there will be about a 100-foot drop, and it will be playing west. And another day, it’ll play in maybe in the 190 range, slightly uphill and south. That’s a 90-degree difference in angle, over 100 feet difference in elevation change, very different stuff.

Golf Advisor: We know of the criticism, but certainly you’ve had positive feedback, right?

Jay Blasi: The first positive comes from the USGA. Their belief in the golf course and willingness to award it their biggest championship eight months after it opened, I think says something. You look at all the various golf raters and critics, we were fortunate enough to win best new golf course by every publication in 2007. So the people who do that for a living obviously thought highly of the golf course for a long time. And if you talked to the players who played in the U.S. Amateur, you’d find a wide cross section.

What we have also found is that the more people play it, the more they seem to enjoy it. So the local pros such as Ryan Moore and Michael Putnam — and a number of collegiate players who have played it over and over again — the first couple of times they played it, they said, “Wow, it was sensory overload, and I was just getting my bearings, but man, the more I play it, the more I understand the side boards and the kicker slopes, I know where to miss and where not to miss.”

Golf Advisor: So it sounds like if I’m in a U.S. Open pool, I should pick someone who has played the course a lot.

Jay Blasi: If I were to make a list of things I’d be looking for, I’d look for who has an imaginative short game and likes the idea of shaping shots — right to left, left to right, high and low. The golf course can be stretched, almost 8,000 yards, so somebody who can hit it long, too. So there are a few guys who come to mind.