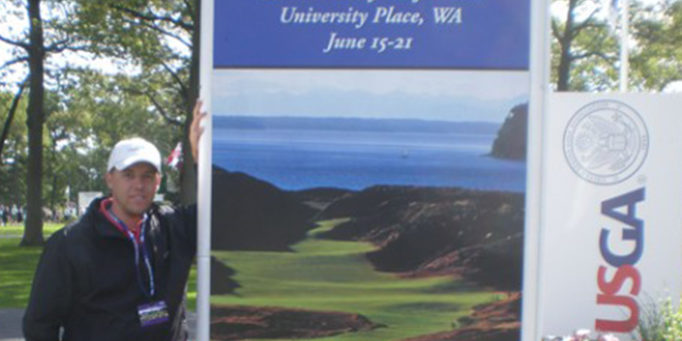 One of the architects of Chambers Bay gives his thoughts on what it takes to prepare for a U.S. Open.

We asked Jay Blasi of Robert Trent Jones II, Golf Course Architects, to review three different U.S. Open venues he was lucky enough to visit in the span of one week this summer. On June 11th, he was at Chambers Bay in University Place, Wash., working on the new practice facility which will be ready for the 2010 U.S. Amateur. On June 14th he attended the 2009 U.S. Open at Bethpage Black in New York and walked all 18 holes in order. And on June 16th he headed to the eastern tip of Long Island to play Shinnecock Hills, site of the 1896, 1986, 1995 and 2004 U.S. Opens.

Separated by geography, topography, time and culture, connected by the game’s national championship, the three courses form a unique triangle in the golfing world.

Bethpage and Shinnecock share Long Island and the Open – and not much else. Bethpage is the truly municipal playground for all New Yorkers, while Shinnecock is strictly private, offering a sanctuary for a few lucky Southampton golfers.

Bethpage is a true parkland layout, a collection of 18 individual paintings framed by trees or tall grass. Shinnecock is a wide open wonder, with holes meandering across rolling fields of fescue. The famed Stanford White clubhouse at Shinnecock, perched on the site’s highest point, affords members and guests a view perhaps unmatched in the game. From the club you can see the entire course, National Golf Links and tree covered islands in Peconic Bay.

Separated by 2,500 miles, 102 years and a private vs. public distinction, perhaps the closest thing to the view from Shinnecock’s clubhouse is the view from the patio at the Chambers Bay Grill. At 240 feet above the water, one can survey the entire course as well as Puget Sound, tree covered islands, and the Olympic Mountains. Shinnecock and Chambers Bay share a grand scale and firm fast conditions. They both allow players to use their imagination around the greens, and both encourage approach shots via the ground. Ultimately, the two courses will be linked as the two “Open” Open venues.

Upon the opening of Chambers Bay, respected golf architecture critic Brad Klein of Golfweek wrote “Chambers Bay is the most carefully crafted and well-designed municipal golf course to open since Bethpage State Park’s Black Course in 1936. The big difference is that Chambers Bay, perched on the windy shoreline of Washington’s lower Puget Sound, has a better natural setting and makes for a more exciting walk.“

While Chambers Bay and Shinnecock will be linked by their links features, perhaps the golf course that Chambers Bay will always be most closely connected to is Bethpage Black. Both courses are truly municipal and both are Open pioneers – Bethpage being the first municipal course to host the Open and Chambers Bay being the first course in the Northwest to host the Open. Both share that “of the people” bond, both are long, and the bunkers at each course dwarf those found on other Open venues.
How they play

Weather and setup are the two biggest things that ultimately determine how a course plays for a championship. But from a design standpoint, each course offers different possibilities. Here is a look at how each course might play for a U.S. Open.

Bethpage is a converted par 70 that can play very long. From tee to green the golf course is extremely demanding and unrelenting. Three of the par 3s can be stretched to over 200 yards and the only two par 5s are not easily reachable. In addition, players are asked to hit the ball long and shape it on a number of difficult par 4s, particularly holes 5, 7, 9 and 12.

If there is any relief at Bethpage Black, it comes at the green. The majority of the greens are round in shape and tilted planes. There is not a great deal of internal contour within the greens (except for the shelf on 15) and therefore the greens can be set up extremely quick (13+ on the Stimp meter). The USGA’s Mike Davis and his team have found interesting ways of adding options to a golf course that is naturally, long, straightforward, difficult and promotes defensive play. By moving tees up on holes 6, 8, 13, 14 and 18 and using hole locations that gather, players were tempted into risks that they would normally avoid.

Shinnecock is a par 70 that does not play very long by Open standards. The majority of the challenge is found in the green complexes, firm and fast conditions and the wind.

All of the holes are bordered by tall fescue which serves as a strong punishment for any wayward shot. The wide open nature of the golf course allows players to take a wide variety of angles to reach their target. However, many of the fairways snake or are set on angles and therefore the player must account for the firm and fast conditions and the run out of the ball.

Most of the holes are flanked by clusters of bunkers that frame tee shots and approaches. In many instances these bunkers will dictate a player’s line and shape of shot. Many of the greens are accessible via the ground, meaning a player can land his ball short and run it into the green.

The greens fit into a wide range of settings with a few perched atop hills, others in bowls and some out in a field. Generally the greens flow with the land, meaning a downhill hole may have a green that runs out the back. The greens can be set up to play a variety of speeds, but can get extremely quick with the wind and the slopes on the greens. Each hole has about 10 yards of fairway around the green where players will use putters, wedges and everything in between. There is not one correct way to play Shinnecock and the player who can figure out the route on each hole that works for them will be served well.

Chambers Bay will likely play as a converted par 70 or 71, and may even have a different par on different days. Due to the wide open nature of the site, the course is likely to be set up longer than any other Open.

Like Shinnecock, Chambers Bay offers players multiple routes to attack many of the holes, including via the ground. Many holes at Chambers Bay have a dominant side where most of the trouble is and then a bail out side. Players who bail out and avoid trouble will then be left with longer and harder approaches.

Many holes feature slopes around the greens that players will want to avoid, or in some cases be forced to use to get their ball on the green.

Perhaps most intriguing will be which teeing grounds the USGA chooses to use. Most holes have over a hundred yards of teeing ground available to the USGA, so they can move the tee blocks around on almost any hole on any day.

The greens at Chambers Bay vary greatly in size, shape, orientation and elevation. However, all the greens have fairway areas around them from which players can use any club in the bag. Many green complexes feature very strong undulations which players will need to consider on their approaches as well as their shots on and around the greens. The fescue greens will not stimp as fast as other majors, with speeds likely in the 10-11 range, but the strong contours and firm conditions will have balls running out in every direction. A player who embraces links golf and is creative around the greens should do well.

Preparing a golf course for a U.S. Open championship is a huge undertaking and starts many years in advance. The preparation is split into two divisions – inside the ropes and outside the ropes.

With Chambers Bay being the first fescue golf course ever (and the first new golf course since the 1970s) to be awarded the Open, the preparation is a little bit different than some of the older courses. The 2010 U.S. Amateur, which the USGA has recently started holding at U.S. Open venues, will serve as a great tool for the setup of the Open. Studying how firm the turf is, how golf balls react on certain slopes, where tee shots land and which hole locations work well will provide the USGA with valuable information to guide us into the set up of the 2015 U.S. Open.

At Chambers Bay, we have recently added teeing grounds that the USGA will likely use in both the U.S. Amateur and U.S. Open. With those additions in place, most of our preparation is centered around the agronomics. Earlier this summer we flagged out where the edges of the fairways will be and have since started to establish a “semi-rough” before the tall grasses. David Wienecke (the superintendent at Chambers Bay) and his team will work with the USGA officials to get the “semi-rough” the right height and consistency for the championship.

In addition to the “semi-rough,” there is a great deal of tall fescue at Chambers Bay. This thin and wispy grass takes years to establish properly and you don’t want it to get too thick. We still need to work on the consistency of these areas throughout the course. Some areas need thinning and others need more grass.

The greens are maybe the trickiest part of the preparation since setting up the course at the U.S. Open speed would not work for everyday play. Those speeds would lead to six-hour rounds and golfers putting off the greens into bunkers. So there is a balancing act with making sure we have a good strong base for the turf and then prior to the event increasing the speeds to the desired levels.

In addition to the grass heights and speeds is the firmness of the turf. This is largely a product of the subsurface condition. At Chambers Bay the course is built on sand so it drains very well. However, through a device called TruFirm, the USGA can test how firm an area of the course is. Based on the readings, Wienecke can modify the maintenance program to achieve the desired results. At Chambers Bay, we want the golf course to be firm and fast, so frequent aerifying and topdressing are needed to provide those conditions.