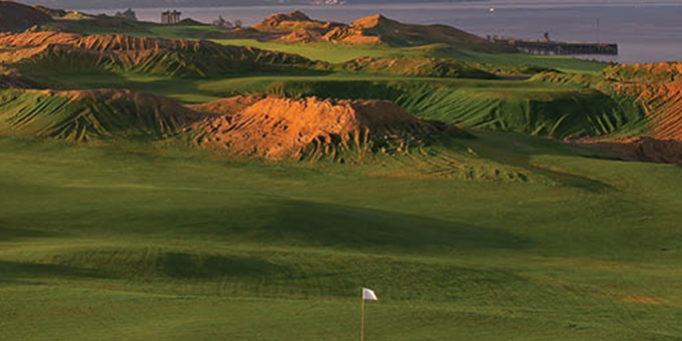 When the U.S. Open arrives at Chambers Bay later this month, it will be a crowning moment in the career of Robert Trent Jones Jr. The 75-year old, having designed almost 300 courses around the world, will become the first living architect in decades to witness the National Championship play out over one of his creations. (The last man to have that opportunity was his father, at Hazeltine National in 1991.) As the president of the company that won the commission from Pierce County, developed a plan to cooperate with various state and local agencies, and worked with multiple contractors to sculpt 18 holes from a 230-acre quarry, the right to rhapsodize on camera and in the VIP tents is patently Jones’s.

That’s the way the golf business—and business in general—works. In recent months, though, some have begun quietly asking: Who really did the job?

A serious attempt to answer that question involves blundering into a thicket of conflicting perspectives worthy of Kurosawa’s Rashomon. According to one person closely connected to Chambers Bay, Jones (who did not respond to a request for comment) was on site “only marginally,” but Bruce Charlton, the company’s chief design officer, says that his boss regularly contributed valuable political advice, and also tapped into his extensive experience with links golf. “Bob would give his perspective on Dornoch, St. Andrews, Turnberry, Lahinch,” Charlton says. “On each specific shot, we’d think about a pattern, then detail it in our own way.”

Jay Blasi began his design career in 2001 as an entry-level associate in Jones’s office. Two years later, the firm beat out four others for the Chambers Bay job. It was the peak of the golf boom and with the company flush with projects around the world, Blasi, then just 25 years old, found himself making more site visits to Tacoma than anyone. “Jay had a passion for that sandbox,” Charlton says. “His energy was infectious.” Another former RTJ II employee says, “No one believed in that project—that we could really build a course that would host a U.S. Open—more than Jay.”

Blasi, who left Jones’s firm in 2012, is diplomatic yet pointed on his role at Chambers Bay. “Mr. Jones is one of the great characters in all of golf,” he says, “And he has a lot of unique and positive traits. When this issue comes up, though, it’s a completely different tone. I know how important the subject is to him. I’m hopeful that we can enjoy this [U.S. Open] together.”

He added: “If I come out and say who did what, it’ll make my life difficult. It would be great if people were able to see it without my saying it.” When asked to elaborate, he adds, “Well, it [Chambers Bay] is pretty much the exact opposite of anything done by the RTJ II organization for the past 30 years.”

Charlton, more than one source suggested, was often the conduit between the principal and his ambitious young associate. “When Bob was out there, we’d listen to Bob,” says Gary Killebrew, the course’s construction superintendent. “But Bruce was the clearinghouse for all of the ideas. There would sometimes be differences of opinion between Mr. Jones and Mr. Blasi. Bruce is a master at balancing all the personalities. He would go to bat for Jay when he thought it was warranted, and at other times he would soften the blow to Jay when Bob would just put his foot down and say ‘no.’ There were some high emotions out there, but that was a sign of everybody wanting to do their best.

“I can honestly say,” Killebrew adds, “that all three of the architects on the line—Bob, Jay, and Bruce—made very strong contributions to the final result. We just want to let the course shine to the world in June, and we’ll sit back, drink a beer, and maybe brag about it a little bit.”

It seems a natural impulse. We know that behind the courses that stir our souls stand real people, and as golfers we want to celebrate the genius of the features they’ve arranged before us, whether they be as grand as the Dell dune at Lahinch or as subtle as a greenside roll at Pinehurst No. 2. As Chambers Bay might suggest, though, creating a golf course is more like making a movie than writing a novel: Many hands are involved. It’s quite common that those doing yeoman’s work to make a design successful— everything from the initial creative act of routing the golf course to the fine finishing details—do not get much credit, if any.

Why does this happen? Part of it has to do with the weight of tradition. As Tom Doak pointed out in a recent interview, “The question of who did the work is often somewhat subjective. There’s who did the routing and who built the thing? Those are two different questions right off the bat. With some exceptions in recent times, the architect is almost never the guy who is actually building the course.”

This certainly was the case in the Golden Age. Donald Ross literally “mailed in” certain of his designs, while Alister MacKenzie’s modus operandi was often to entrust the execution of his plans to local trustees Robert Hunter in California, Mick Morcom in Australia, and Perry Maxwell in the Midwest. The Long Island surveyor Seth Raynor built many of C.B. Macdonald’s courses from the National Golf Links onward, but it’s possible he’d be a footnote to history if his mentor hadn’t retired young, allowing him to step out and design great courses under his own name.

Golf aficionados are beginning to pay closer attention to the Hunters and Raynors of the world. “There’s a lot more interest in architecture now than there used to be,” says Doak, who, through seminal books like the Confidential Guide and The Anatomy of a Golf Course, deserves a fair amount of credit for this development, as do websites like golfclubatlas.com, which provides a forum for amateur historians to throw all kinds of information (and, occasionally, misinformation) into the public arena. When the site is at its best, that information is then dissected and advanced by the hive mind. This happens with small, local clubs—one researcher recently built an interesting case that Florida’s Lake Wales Country Club was designed not by Ross but by Raynor—as well as some of the game’s most venerable venues.

When it emerged in James Hansen’s biography of Robert Trent Jones Sr., A Difficult Par, that RTJ claimed to have routed Vancouver’s Capilano Golf Club, a group of Canadian architects and writers fired back with evidence supporting the architect of record, Stanley Thompson. (It’s still not a good idea to ask the GCA crowd who designed Merion.) This online fervor for history is just the tip of the iceberg. Offline, club members are becoming increasingly aware of the provenance of their golf courses. This awareness could be influencing the scrutiny that’s now being paid to contemporary designs.

Another sign of change is the gradually diminishing cachet of designs credited to tour players. Many avid golfers have come to see this brand of designer-label golf as something of a charade. While their experience may at times prove relevant when it comes to the niceties of strategy and “shot values,” the technical expertise that goes into building a course that drains properly should serve as fair warning that the guy at the controls usually isn’t the one who has spent most of his life making birdies for bucks.

From a marketing standpoint, it’s understandable that the name of Jack Nicklaus moves the needle in a unique way, but Jim Lipe was the man on the ground for many of his projects. It should take nothing away from the great Arnold Palmer to speculate that when it was recently announced that his firm had been commissioned to design a second 18 at Castle Stuart, that the savvy architect-developer Mark Parsinen was primarily hiring associates Brandon Johnson and Thad Layton, both of whom have produced acclaimed work under the King’s banner. At Diamante in Mexico, the club’s promotional strategy is built around active players Davis Love III and Tiger Woods, but Paul Cowley and Beau Welling, respectively, are the names golfers should applaud first.

Perhaps unsurprisingly, the fascination with “who did what” is stronger in the U.S. than overseas. I asked Doak if he could think of a situation where our understanding of a particular course might change if we knew it had been designed by Architect X instead of Architect Y.

“The label shouldn’t matter,” he replies after a hesitation. “People should look at the golf course for what it is, and not who did it.” He points out that many of Britain’s famous courses have evolved through the decades, with up to half a dozen architects adding their touches to the design. Ganton and Royal Porthcawl are prime examples: They may be “mutts,” but they’re glorious nevertheless.

When it comes to assigning credit to courses, it can’t be overlooked that when the historical record is open to interpretation, the “tie” usually goes to the bigger name. In 2002, for example, Ron Whitten of Golf Digest filed a controversial feature asserting that Bethpage (Black) was not a late-career triumph of A.W. Tillinghast, as the conventional wisdom had it, but rather had been designed by one Joseph Burbeck, a New York park superintendent. Recapping the contretemps several years later, Charles McGrath wrote in the New York Times: “Who originally designed the course hardly matters except on sentimental grounds, and here [Tillinghast’s camp has] an edge, because unlike the self-effacing Burbeck, who if he did design Bethpage never claimed credit, Tillinghast was one of the most vivid and flamboyant characters in golf history.” Associates toiling in the shadow of famous principals might draw a lesson from the Burbecks of the world, but it’s unlikely they’ll ever receive their just desserts unless, like a Seth Raynor, they go on to have a significant career of their own.

All of this said, it would be unwise to automatically downplay the significance of the architect of record. They may not be out on the ‘dozer shaping every last bump and ripple, but the best of every generation do far more than point and wave. And it’s still their names and reputations that are on the line if the product is poorly received.

In describing his working relationship with his associates, Doak says, “There are some holes where I have a really strong idea of what I want to do, but also a lot of others where I give the guys a couple of basic parameters and let them do what they think is right. That’s why they want to work for me—if they do something cool, it gets to stay in the golf course, and that’s what excites them.” But, he adds, “Sometimes you have to remind guys, ‘Yeah, the green you built on 12, that was really great! But remember that bunker you wanted to build in the middle of 10? The one that I took out?’ There’s a point at which the associate takes credit for stuff, but he doesn’t get to make any mistakes.”

In other words, the buck has to stop somewhere. As in any enterprise, creativity may be important, but nothing beats a great editor.