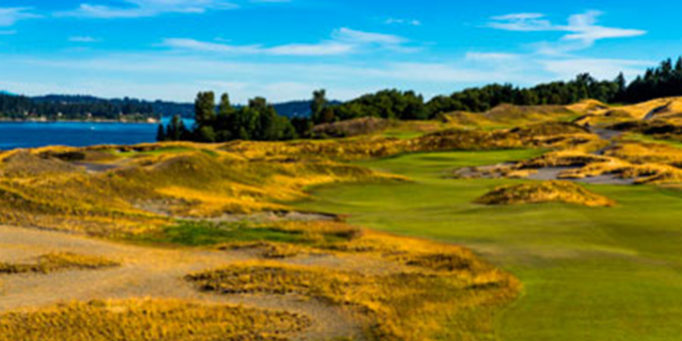 There will be a number of “firsts” at the 2015 U.S. Open – first time held in the Pacific Northwest, first U.S. Open course played on all fescue turf, first new design since the 1970s.

And for the players, it will be the first time at a U.S. Open where they will benefit from landing approach shots away from the greens.

Chambers Bay, perhaps more than any other championship course, features green surrounds with major slopes that must be used on approach shots as well as greenside recoveries. These undulations that come in the form of sideboards, backboards, kicker slopes, rolls, swales, hillocks, spines and bowls will likely separate those who compete for the championship and those who leave early, frustrated by how “unfair” the course is.

Routinely, tour players are asked to hit narrow fairways and greens surrounded by bunkers or water. At a U.S. Open these features are often magnified. The rough is thicker, the fairways are narrower, and the bunkers are deeper. But tour players are so good at controlling their golf ball that they navigate these obstacles with ease, hitting long straight drives and towering approaches that stop on a dime. At a British Open, tour players must deal with the wind, firm conditions and some nasty pot bunkers forcing them to adjust a bit and to land their ball short of greens or play bump-and-run shots.

At Chambers Bay, players will be asked to go a step further.

Almost every approach shot will have some form of hazard to avoid (a bunker, a fairway hollow, a dune, etc.) and there will be options for players on how to attack. Players will be able to play shots directly at the target, but given the firm conditions that may not be the best way to get close to the hole. Instead, the smart players will study the features around the greens and figure out how to use them in order to get close to the hole.

For example, the 11th hole is a long par-4 with a wide range of options. Off the tee, players must decide if they want to play right or left of a central dune. On the approach, they will be hitting a long iron into a narrow but deep green with a huge falloff on the left and a strong sideboard on the right. Players will need to study the hole location and determine if they should aim for the green or purposely play right of the green and use the slope.

In addition to the line of attack, players must also decide if they should land the ball short or if they will need to play the shot into the slope with spin.

This same type of dilemma will confront players throughout the entire round.

In 2010, the U.S. Amateur was played at Chambers Bay and the results were telling. The championship concluded with Peter Uihlein (the No. 1-ranked amateur) defeating David Chung (the No. 2-ranked amateur).

As interesting as the finish was, the early rounds told a story as well. Many players had never experienced links golf before. Many players were frustrated by their ball not finishing where they hit it. Those players left early. Others, and in particular Uihlein, embraced the ground game. Uihlein and his caddie Alan Bratton studied the slopes and were in constant discussion over where to land the ball and in which manner to do so. On the 13th hole, another long par-4, the caddie and player agreed to land the ball left of the green, but debated if that should be done with cut spin or draw spin. It is this type of thought that will guide someone to victory this June.

The residents of the Pacific Northwest have known for centuries how special their ground is. Come June, players from all over the world will learn the importance of the ground at Chambers Bay.

Jay Blasi was a project architect for Robert Trent Jones II Golf Course Architects during the creation of Chambers Bay.